No Toll Increase for ExpressToll Users for up to Three Years

November 9, 2017 — Today, the E-470 Board of Directors are announcing a toll adjustment that will freeze toll rates for ExpressToll drivers on the 47-mile user-financed roadway through 2020, pending annual board approval. This means ExpressToll users driving E-470 will be able to lock in the rates they are paying today in 2017 through 2020. Additionally, the toll rate on E-470 between I-70 and Peña Boulevard, (Toll Plaza C), will be reduced by $0.25 to align the toll pricing with demand in the area and further ease congestion on the neighboring roadways. Currently, ExpressToll customers on E-470 pay $1.25 to access the roadway via the tolled on-and off-ramps and $2.70-$2.95 per toll plaza.

While ExpressToll rates on E-470 will remain static, License Plate Toll’s (LPT) are being adjusted to cover the higher cost of collections. With the new toll adjustment, the premium that LPT customers pay over ExpressToll customers will increase due to the escalating operational and collection expenses. The ExpressToll and LPT adjustments for E-470 will go into effect January 1, 2018.

E-470 Executive Director Tim Stewart appreciates the Board’s decision. “This should incentivize drivers to sign up for an ExpressToll account to benefit from the huge savings.” The LPT differential helps cover the costs associated with collecting License Plate Tolls. Stewart states, “It takes a large amount of resources and manpower to maintain the cameras, look up each license plate, cross reference the plate with the state DMV for verification, send out printed bills and continue to collect on those tolls.” Stewart is excited about passing savings on and rewarding new and existing ExpressToll customers.

E-470 is the 75-mph toll road running along the eastern perimeter of the Denver metropolitan area. E-470 is a user-financed roadway, receiving no local, state or federal funds for financing, construction, operations or maintenance. E-470 is a political sub-division of the state governed by the E-470 Public Highway Authority Board composed of eight local governments including Adams, Arapahoe and Douglas counties, and the municipalities of Aurora, Brighton, Commerce City, Parker and Thornton. E-470 also operates ExpressToll, the all-electronic toll collection system available on E-470, Northwest Parkway, and Colorado’s Express Lanes. 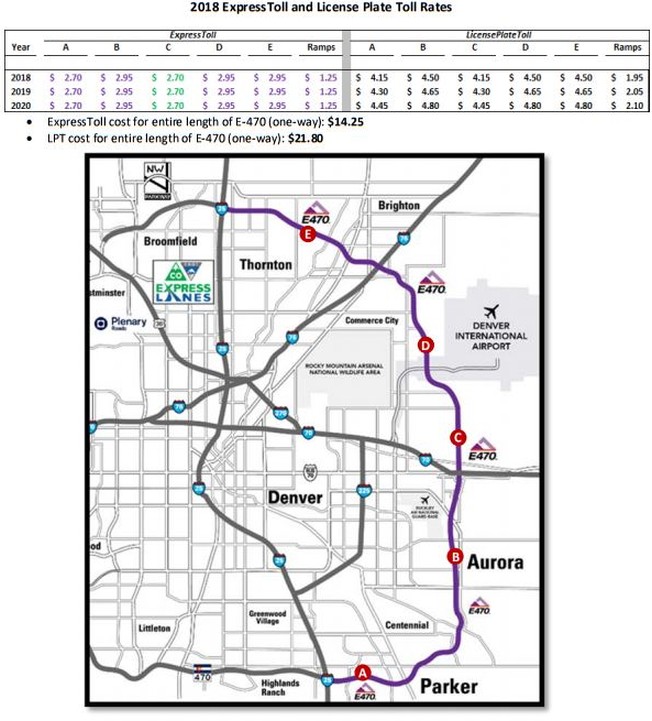